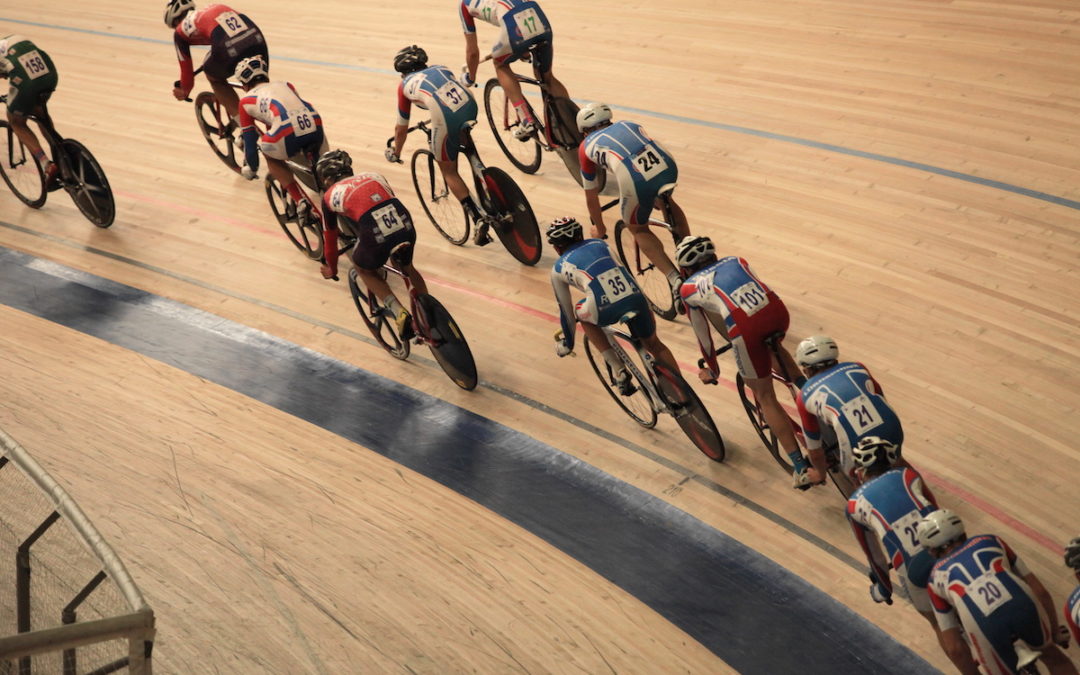 Icy temperatures, slippery descents, snow and cold toes after a couple of minutes: There’s not one road biker who enjoys these conditions. Even if you belong to the hardcore winter cyclists, cycling sure is more fun when it’s a little warmer. Track cycling is a great alternative to cycling outside in the cold season as long as there’s a track in your city and you’ve overcome the initial difficulty of getting used to cycling this way. We provide insight in a sport that many hobby cyclists rave about.

One of the first track races took place in 1868 in Paris. Track cycling is an olympic discipline and according to the UCI (Union Cycliste Internationale), all race bike tracks (velodromes) with a length of 133m to 500m can be used to hold competitions. Tracks on which world championships or Olympic games take place must be at least 250m long. The curves’ incline varies between 45° and 60°. There are different disciplines such as sprint, team sprint, individual time trial, keirin (a pacemaker gets the cyclists to 50 km/h), madison (a team race with two cyclists) and more. The track either consists of wood or concrete.

The rules on the track

The track may only be used with a special bike on which you ride counter clockwise. Riders are usually overtaking others on the outside. On the track itself, there are several lines:

The bike and the cycling technique

It’s forbidden to ride conventional road bikes on the track as track bikes have neither brakes no gears. There’s no idle speed, thus cyclists have to pedal all the time. You slow down by cycling into the inclined curves or coasting. Track bicycles are characterized by 27 inch tubed tires, a smaller distance between the tires, higher bottom brackets, a shorter crank and a shorter head tube. The pedals won’t touch the ground when riding through curves as all of the bike’s features are made for cycling on the track. Apropos curves – if you ride too slowly, you slip. A track bike is more agile than a conventional race bike. Unlike with race bikes, you can only change direction or turn by shifting your weight. The minimal speed needed when cycling on the track is about 28km/h, however, 30-35km/h are better if you don’t want to lose your grip.

During track cycling, very high pedal frequencies (world record: about 110 turns per minute) and speeds are reached as it’s necessary to reach a certain speed to be able to cycle properly on the track. If the track is 250m long, you’ll have to do a lot of rounds to get the miles in. Due to the high speeds and high level of concentration needed constantly, it’s likely that you won’t be able to do as many rounds at the beginning as you’ll be needing to take breaks. However, you can use this to your advantage to do interval training. The speed changes in the different rounds increase your heart rate and pump lactate into your legs. This gives you strong legs, stamina, a round pedal stroke and a great base for training on the street. Well-practised cyclists can also do a solid endurance training on the track e.g. try to cycle on the track for 1 hour straight.

Track cycling is the ideal sport for escaping ice and snow but still working on oneself. However, it requires some practice and is quite costly (entrance fees for the velodrome, borrowing a bike or buying your own track bike). This sport is a lot more fun in a group as you can motivate and push each other. You’re training both your stamina and strength and those who’re also training for a triathlon can even do a brick training on an indoor running track too afterwards stepping off the bike.

Have you ever tried track cycling before? 🚲