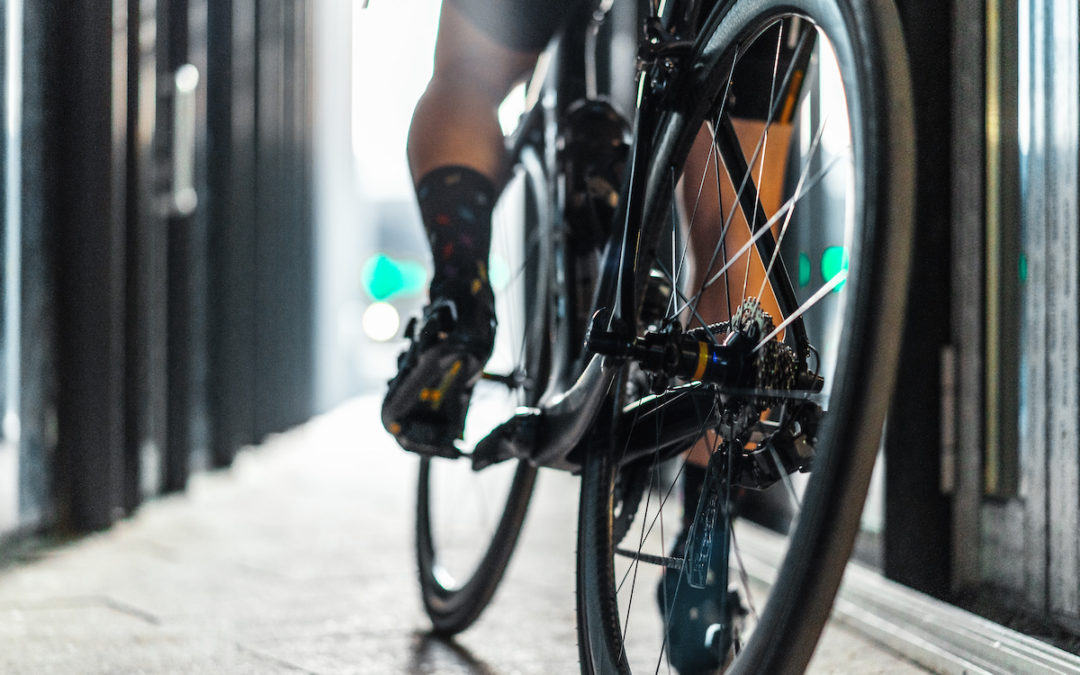 When cyclists hear the words “technical improvements”, their most common thought is most likely that it’s possible to produce lighter and faster bikes thanks to new methods and materials – if they aren’t already thinking about tuning their old bike. However, technical innovations don’t only affect bikes, but can also concern cycling infrastructure. In this post, we’ll introduce you to 5 innovative changes in cycling infrastructure that revolutionize cycling and provide a whole new cycling experience.

A fluorescent coat which absorbs sun light during the day and radiates light at night is spread on cycle lanes. The coat doesn’t wear off for several years and also functions without any problems if there’s only one hour of sunlight per day. No electricity is required for the lanes to light up. On the one hand the aim of this invention is to motivate more people to take up cycling, on the other hand, the cyclists’ safety and visibility is increased, especially at night. Self-illuminating cycle lanes have already been implemented in England, Poland and the Netherlands and light up cycle lanes in blue, green and violet.

In the Dutch city Zwolle, recycled plastic was used to build 30m of cycle lane using old plastic bottles and plastic furniture among other things. As the material is already pre-manufactured, it is possible to build such plastic cycle lanes within a very short time frame. Furthermore, rain gutters are easily built into the cycle lanes and can be used to store water, thus protecting streets from flooding. The concept is still at the very beginning and it must yet be tested how the plastic cycle lanes fare with regards to road experience, durability and differences in temperature.

Cyclists and cars using the same street during rush hour is not a good combination, especially if there aren’t any cycle lanes. Some countries have introduced cycle superhighways that enable cyclists to move forward faster without having to wait at red traffic lights or being overtaken by cars that don’t keep the necessary side clearance. The aim of the cycle superhighways is to make sure cycling is seen as a serious alternative to public transport or cars. Cycling tunnels follow the same concept and make sure cyclists safely get from one place to the next.

In most cities, cyclists can’t get around climbing hills here and there which can make even the most experienced city bikers break a sweat. In Trondheim, Norway, a sweat-free solution for this has been found – in 1993 a bike lift was invented. Lazy cyclists can use the lift to reach the top of a hill while relaxedly sitting in the saddle without pedaling at all by simply shifting their weight forward and resting their right foot on a metal plate which runs on a rail. The lift was reopened in 2013 under the new name CycloCable and overcomes 130m of distance in 63 seconds. A great idea which has also already been adopted by the Swiss city Winterthur.

Oftentimes, bike racks are completely filled with bikes, however, due to spatial constraints, it isn’t possible to build more of them. One solution for the problem: Underground bike garages such as the ECOCycle garage in Japan. Simply put your bike into a groove in front of the entrance door and wait for it to be automatically transported into a free “parking spot” underground. Using a personal card, the bike is retrieved from its spot by the machine within 13 seconds. Compact and efficient!

What do you think about these 5 innovative changes? 🤔

Let us know your opinion in the comments!